When I receive an album for review I look at the blurb that comes with it to see what I should be expecting and one of the lines that gives me the heebie jeebies is ‘Blues legend xxxxxx to release new CD’ when that Blues legend is someone I’ve never heard of. I don’t claim to know all of the Blues musicians but I would expect to have heard of a ‘legend’. On the other hand this album by Billy Hector is the stuff of legends! Hector has been around the block a fair few times and it is clear where his influences lie – artists like T-Bone Walker, Freddie King (a great version of Goin’ Down in the Freddie King style) and Johnny Winter are pretty easy to hear in his playing but I definitely find myself hearing Little Feat and James Brown in his funkier numbers such as the title track – so much so that I found it impossible to sit still and type this review. His vocals are rough and gritty, speaking loads of his New Jersey upbringing, and his guitar playing ranges from some sublime slide to rhythmic and funky riffing. He clearly understands the Blues and happily switches between Texas stomp and Delta slide and touching on grinding slow Blues on tracks like Evil, Slick & Sly. Personal favourite track is Hammer which funks along while Hector plays some gorgeous Albert Collins style guitar – the fact that this is a trio simply amazes – but a very close second is the awesome People Of The World – 8 minutes of sassy, horn laden R&B that just flows and grooves. I’d love to hear Curtis Mayfield or Sly Stone fronting this one I’m still not convinced by the ‘Legend’ title but the album is awesome and shows his history and pure talent. Do not let this one pass you by. 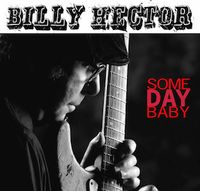 Hit the Road Live from the Saint!!!